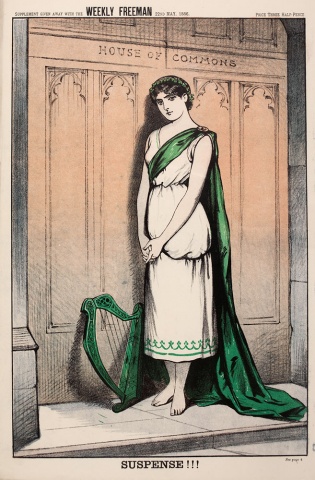 Part I: History and Politics

The notion of “Home Rule”, originates from Irish parliamentary constitutional nationalism, which became influential at Westminster from the end of the 19th century. Home Rule was then a means to ensure the preservation of the United Kingdom, as well as cope with the demands for more political independence from Ireland. In the words of Gladstone, in his 1886 “Home Rule speech”, when he explained that the first Home Rule Bill he introduced into the British Parliament was not a “separation bill”: “the separation of Legislatures is often the union of countries, and the union of Legislatures is often the severance of countries[1]”. The bill was defeated in the House of Commons, as Unionists left the Liberal party, and in 1893 the House of Lords rejected a second Home Rule Bill. It is only in 1912, just before WW1, that the British Parliament gave its consent to Home Rule in Ireland, despite fierce opposition by Ulster Unionists. Simultaneously, John Redmond, the leader of the Irish Parliamentary Party, enjoined the National Volunteers to fight in the British army. For this reason, as well as his description of the ensuing 1916 Easter Rising as “wicked and insane”, Redmond was at the heart of a controversy regarding the erection of a banner in his honour on the Bank of Ireland building at College Green, in Dublin, for the centenary of the Rising. Debates about the memory of the Home Rule movement, among historians but also politicians, journalists and the general public can still be fierce in 21st century Ireland.

More generally, the concept of home rule addresses the dualism between one central power, Westminster, and different levels of local autonomy. Such dynamics between centralization/decentralization within the United Kingdom, and the paradoxical necessity underlined by Gladstone to share the central power in order to maintain the kingdom together, call to mind the words of Prime Minister Tony Blair, as he was implementing devolution at the end of the 1990s: “I tell you, devolution will be and is the salvation of the UK”. Long before devolution was established in the UK, Northern Ireland had experienced Home Rule, with a Northern Ireland Parliament, between 1921 and 1972 – when direct rule was established by London in the context of the Troubles (1968-1998). After the failure of the Sunningdale Agreement (1973) and the Anglo-Irish Agreement (1985), a Northern Ireland Assembly, with a power-sharing executive, was created under the 1998 Good Friday Agreement. However, the equilibrium between home rule and direct rule has proved to be fragile as the Northern Ireland Assembly has remained suspended since January 2017, due to the deep-rooted divisions in the Northern Irish political class.

As the concept of home rule explores the notions of subsidiarity and sovereignty within a larger composite entity, the current commitment of the Republic of Ireland to economic and political supranational institutions should also be discussed. For example, the Economic Adjustment Programme for Ireland, which was set up in the wake of the 2008 economic crisis, was interpreted by some political parties, in particular on the left of the political spectrum, as the sell-out of national independence to the Troika – the European Commission, the European Central bank and the International Monetary Fund. Is ruling from home possible under the institutionalized dominance of the world’s leading economies? What is more, the European Union plays a crucial part in the debate about self-government in Ireland. Firstly, is the membership of the Republic of Ireland in the European Union compatible with a ruling that would actually be “from home”? Indeed, the unequivocal “No” reply in the 2008 referendum on the Treaty of Lisbon (53.4%) was primarily motivated by the claim that the main centre of power should remain at the state level. Besides, one cannot ignore the prickly issue of Brexit: since 56% of the population in Northern Ireland voted to remain in the European Union in the 2016 referendum, shouldn’t direct democracy provide for the wish of the majority “at home” to be respected? Such questioning raises essential issues related to the citizens’ territorial definition of “home” and their multifaceted sense of national belonging. Finally, the principles of neutrality and non-alignment, which some commentators have connected with articles 28 and 29 of Bunreacht na hÉireann – the Constitution of Ireland – are central to the identity of the Irish state and Irish diplomacy on the international stage, at the UN in particular. They have raised similar questions throughout the 20th and 21st centuries: should the Republic of Ireland take part in European military ventures? Should Shannon airport be used by allied foreign troops?

“Home Rule” is of course a well-identified political and institutional concept, which was of vital importance in the modern history of Ireland, but we may also unspool all the possible meanings of the phrase so as to include literary, artistic or cultural aspects of the subject.

It could first of all simply involve literary or artistic representations of the events or characters dating back to the troubled historical period when Ireland was struggling to obtain its parliamentary autonomy. An example of this would be Anthony Trollope’s novels, which as John McCourt’s presentation of them argues, “never shied away from the great and sometimes terrible issues, such as land agitation, Home Rule, starvation and Famine that affected the country at all social levels during and after his long sojourn there”. We can also think of the eminent role played by the figure of Parnell in the writings of James Joyce, where he appears at least in two most famous passages, the “Christmas dinner” episode in A Portrait of the Artist as a Young Man and in the short story “Ivy Day in the Committee Room” included in Dubliners. Closer to us, the late Clare Boylan had chosen the title Home Rule for her 1992 novel, taking place during the 1916 Easter Rising, in which she used the phrase literally, to depict the domestic hell experienced by a housewife, the mother of several children, under the tyrannical domination of an improvident husband.

“Home Rule” may indeed apply to the yearning for various kinds of domestic autonomy and self-government, in the past and in the present: for instance, the wish for Irish women to control their destinies, to escape the snares of domesticity and to enjoy equal rights regarding the running of the home and the family. This may find echoes in innumerable works of Irish fiction or drama, from Sean O’Casey’s Juno and the Paycock to John McGahern’s The Barracks or Amongst Women. Roddy Doyle’s moving portrait of a beaten wife in The Woman Who Walked into Doors and Paula Spencer would be another point in case, as well as some of Claire Keegan’s or Anne Enright’s short stories.

But we may also take into consideration the issue of a local, domestic Irish art striving to become independent from larger centres of production and publication, foremost among them London, the colonial metropolis, but also New York and other transatlantic cities. This yearning for the autonomy of Irish culture and art was of course quintessential to the Celtic Revival Movement, with its emphasis on the promotion of Irish literature, Irish theatre, Irish music, Irish folklore, Irish architecture, etc. However the idea of autonomy for art and culture denies the reality of the inevitable circulation of ideas, influences and cultural products across  Europe and even across the Atlantic Ocean. How can the nationalist, anti-imperialist claim for an autonomous art be reconciled with the influences Irish artists and intellectuals received from the Continent and from America?

The question remains vivid regarding a particular field of cultural production, that of publishing. For a long time indeed, Irish writers looked towards England to find an audience, and few local publishing houses could compete with the metropolis. This was regarded as a serious challenge by Yeats who with the help of his sisters founded the Cuala Press; in the twentieth century, we may think of Dermot Bolger’s Raven Arts Press which in the 1980s and 1990s contributed to keep a local, independent publishing activity alive.

Today, a number of local journals and publishing houses have emerged, allowing yet a new revival of Irish literature. But to what extent is this new wave of Irish writers autonomous from outside influences?

Can the concept of  a literary, artistic and cultural “home rule”, that is of a self-sufficient, self-enclosed, self-ruled local art, ever be sustained, in Ireland and elsewhere?

We suggest the following topics for a thorough exploration of the concept of home rule:

RISE is a multi-disciplinary, peer-reviewed journal and welcomes papers from a variety of areas including Film & Visual Arts, Literature, History, Cultural Geography and Economics. Abstracts (200 words) to be sent by 1 April 2019. Articles should be 7000-8000 words in length. The deadline for submission is 30 June 2019. Publication will be in September 2019.